On the 17th of July 2014, 20 theology students from the University of Pretoria visited the Catholic Parliamentary Liaison Office in Cape Town to learn about the work done there.  They were accompanied by Dr Johan van Der Merwe. Two researchers from the CPLO, Lois Law and Mayibuye Magwaza, spoke about the CPLO’s role and its work as well as the research and roundtable discussions that the CPLO undertakes. The students had just completed a tour of Parliament, and were very interested in learning about the way the South African Catholic Bishops’ Conference participated in public policy. They were particularly interested in the possibility of setting up similar structures within other faith based groups, or within their own faculty.

Below: Mayibuye Magwaza speaks to a group of students about the CPLO’s role in liaising with Parliament. 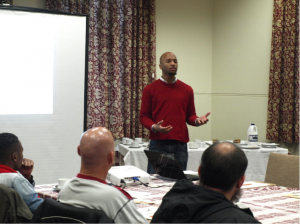 Below: Students listen to a presentation about the CPLO’s role in public policy 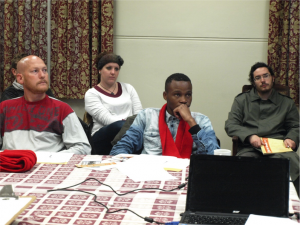