The question of public housing in South Africa has been a difficult and conflicted one with many South Africans living in shacks and overcrowded spaces. In the midst of this, the situation of migrants is found to be even more precarious and difficult. Speakers who addressed this discussion were: Ms Tendai Bhiza (Office Administrator, People Against Suffering, Oppression and Poverty – PASSOP); Ms Jane Kwanswe (Welfare Consultant, Scalabrini Centre); and Mr Brilliant Nyambi (Youth Peer Educator Coordinator, Africa Unite). It became obvious as the discussion unfolded that there were three pillars which underpinned the problems migrants faced in accessing not just social housing but housing in general. 1. Legal documentation. The problems of migrants start with problems around documentation with Home Affairs often quite inefficient in processing the documents of migrants timely and properly. This means that huge numbers of Migrants either have no documents at all; have incomplete documents; have temporary documents; or have the wrong documents. To compound the problem, most South African have no clue what the various migrant documents are and what they mean. This leads to problems with police; problems with access to banking; access to social services; and even with landlords, who all expect a South African ID for all transaction when Migrants often have other legal documentation other than Green ID. 2. Failure to understand who is what! Asylum seekers vs Refugees. The vast number of migrants in South Africa are considered by home affairs as asylum seekers and not refugees. Only about 10% are given refugee status that gives all rights of a citizen except the right to vote. However, asylum seekers get temporary documents valid from around a month to three or four years. This makes it difficult for many migrants to get access to services such as banking which is required for renting or buying housing. It also means it’s almost impossible to get a lease if your documents are still temporary. It is even worse if the documents are expired but are still being processed by Home affairs, meaning the migrant is without any documents to contract anything. 3. Poverty. Because of the difficulties that migrants have to access housing legally, many South Africans will offer them housing at higher prices and will refuse to give back their deposits back and many other forms of exploitation of migrants takes place. This exploitation exacerbates the conditions of already poor migrants. Poverty also means that people end up living in shacks or abandoned buildings and other dangerous spaces because they cannot afford to live anywhere decent. Poverty also means many are forced to find places closer to work, but places that are expensive or overcrowded.

In all these problems, the option of accessing social housing becomes close to impossible, making the migrants even more vulnerable and poor. 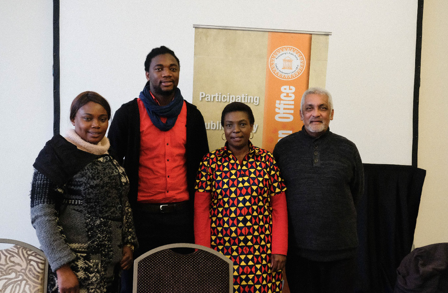