On the morning of 27 May 2015, the Catholic Parliamentary Liaison Office in collaboration with the Hanns Seidel Foundation and the Institute for Security Studies (ISS), hosted a seminar on new research by the ISS which explores Africa in the global power context and the future capabilities of the continent’s Big Five: Algeria, Egypt, Ethiopia, Nigeria and South Africa. Dr Julia Schünemann, Senior Researcher and Project Leader, ISS, served as the speaker and Dr Mills Soko, Associate Professor, Graduate School of Business, University of Cape Town was the respondent. The aim of the seminar was to discuss the historical distribution of power in Africa and how it is likely to change over the next 25 years. Dr Schünemann presented on African power in the Global Context; Africa’s status in the world; measurement of power; the capabilities of Big 5; as well as the ability of countries to project their respective potential. The publication states that in an increasingly multipolar world, parts of Africa will become more prosperous; however African power on the global front will remain peripheral. The drivers of national power used in the publication are Demographics; Economics; Military; Technology; and Diplomatic footprint. The study holds that Nigeria currently wields the greatest ‘power potential’ closely followed by Ethiopia. Dr Mills Soko offered a constructive critique stating the definition of power is too state centric, focussing on economy size instead of economic quality and limiting our scope by neglecting the important role soft power plays in African politics. He also took issue with the omission of Angola from the list of top power states, as it should have replaced Ethiopia. He also mentioned that the rising influence of multi-nationals in Africa can be attributed to a lack of proper governance on the side of countries. The full results of the research are published in the latest paper in the African Futures series, which was launched at the seminar. 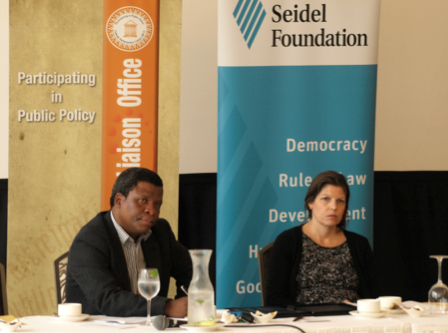 Power in Africa presentation 27 May 2015.pptx