On 9th June 2015, the Catholic Parliamentary Liaison Office (CPLO), in collaboration with the Hanns Seidel Foundation, hosted a Roundtable discussion on “The State of the Judiciary”. The guest speakers were Chris Oxtoby of UCT’s Democratic Governance and Rights Unit, and Carmel Rickard, veteran legal writer and journalist. The Deputy Minister of Justice and Constitutional Development, John Jeffery, attended the discussion and spoke briefly. The discussion covered a wide range of issues, including the independence of the judiciary, the role of the Judicial Service Commission, administrative flaws within the judicial system, transformation of the bench, and the importance of the magistracy. The roundtable was well attended, with representatives from academia, parliament, the diplomatic corps and numerous civil society organisations in the audience. 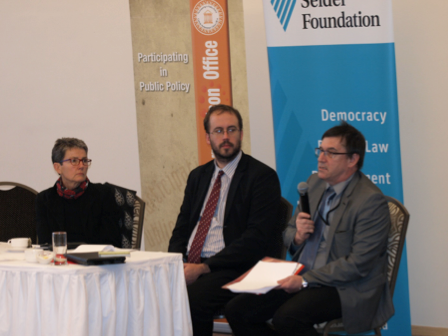