On 1st September 2015, the Catholic Parliamentary Liaison Office (CPLO) with the Jesuit Institute hosted a luncheon with former Minister of Finance, Mr Trevor Manuel. The purpose of this luncheon was to provoke leaders in the Christian community to assess and critique their position as the Church 20 years into democracy, and thereby competently and effectively add their wisdom to the public domain, particularly the political sphere. Mr Manuel posed two questions to those who were gathered: 1) what do you stand for, and 2) where do you derive your legitimacy? He emphasised that it was important that the Church be able to answer these questions so as to remain relevant and to sustain its power and influence in society. Mr Manuel said that as it stood, the Church was too fragmented to make its best possible contribution to society, and he asked why this was the case. He said that the Pentecostal/charismatic churches were growing rapidly, while the mainline churches remained stagnant in numbers and influence. A number of political leaders and MPs were Catholic, for example, but they did not appear to be much influenced by the Church’s positions on important social and moral issues. He asked if society had become too liberal for the traditions and values the Church represents; was there still any power from the pulpit? He went on to say that it was important that theology be contextual; the Church could not live in the past. The Church’s message was strong, but for some reason there was a daily battle for it to find resonance in the public domain. These were some of the issues the Church needed to grapple with if it wanted to persuade others to the faith and to play its rightful social role. 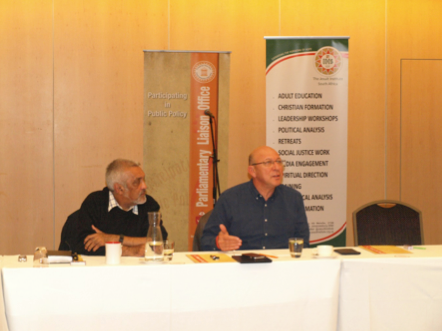