The CPLO and the Hanns Seidel Foundation co-hosted a roundtable discussion on the draft Prevention, Combating of Hate Crimes, and Hate Speech Bill. The discussion, which was attended by 72 people, was held at the Townhouse Hotel in Cape Town, and was addressed by two speakers: the Deputy Minister of Justice and Constitutional Development, Mr John Jeffery; and the secretary of the Hate Crimes Working Group, Mr Matthew Clayton.

Mr Jeffery explained that the new law would help to ensure that hate crimes were taken more seriously by the courts, and it would provide minimum sentences for the more serious crimes such as murder and rape.

Mr Jeffery conceded that it is difficult to define hate speech in such a way that it does not infringe on freedom of speech; however, the Bill had been circulated for comment precisely in order to allow people to have their say on this contentious aspect, and government is open to tightening up the wording if necessary.

Mr Clayton noted that the hate speech provisions were far too wide-ranging and could be used to clamp down on debate, on political criticism, and on the free expression of contentious ideas. Mr Clayton also questioned whether the criminal law was the correct mechanism for dealing with the social problems of racism, sexism, homophobia, etc. An educative and conscientising approach was more likely to bear fruit in the long run.

The meeting ended with a lively discussion from the floor, and participants were encouraged to read the Bill for themselves and to comment on it once the final version is tabled in Parliament in a few months’ time. 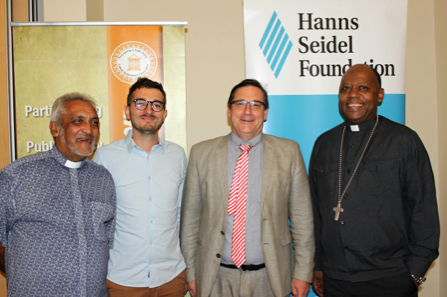