On 6th May 2016, the Catholic Parliamentary Liaison Office (CPLO) and the Hanns Seidel Foundation (HSF) hosted a lunch meeting with the chief whip of the Democratic Alliance, Mr John Steenhuisen.

Mr Steenhuisen began by validating the importance of organisations like the CPLO, and noting the significant role a strong and vibrant civil society plays in keeping South Africa’s government and politicians accountable and responsive. He then went on to discuss the current situation faced by Parliament in light of the recent ‘Nkandla’ judgment passed down by the Constitutional Court on 21st March. He stated that, although much of the media focus had been on President Jacob Zuma, the main subject of the judgment was Parliament; there were far more negative references to the failings of the institution, particularly its inability to hold the executive accountable – which is one of the principal functions of Parliament as framed by the country’s Constitution. Mr Steenhuisen thought that the ruling was a clarion call for a deep structural reform of how Parliament operates and how it holds members of the executive, and the President, responsible. For two decades there had been a “pulling of Parliament’s teeth”. What the framers of the Constitution intended for Parliament to be doing, and the mechanisms for Parliament to do its job, had been consistently undermined. This had set in during the “imperial style of governing” during the Mbeki presidency, when Parliament’s checks and balances became practically onerous. The concerted drive to weaken Parliament’s role of holding the executive accountable continued until the present.

This was clear in the matter of oral questions, the one way in which members of Parliament could interact with ministers, the President or the Deputy President, in an unscripted and spontaneous way, by asking probing and sometimes unexpected questions. However, oral questions, which used to occur every 2 weeks under the Mandela presidency, are now once every term under the Zuma administration (4 times per year), with ministers responding to questions approximately every 2-3 months. Mr Steenhuisen stressed that the format for question and answer sessions was problematic, insofar as questions had to be submitted to the ministers or President often weeks in advance, which ultimately gave them plenty of time to have the questions answered by officials and functionaries. This was problematic because members of Parliament did not really know who was answering the question, or if the President or minister actually had any idea of what was happening in their portfolios.

Regarding the local government elections, Mr Steenhuisen was optimistic about the DA’s chances, but would not commit himself to a percentage prediction. He believed the party had a particularly good chance to win in Nelson Mandela Bay metro, and would do well in Tshwane and Johannesburg. 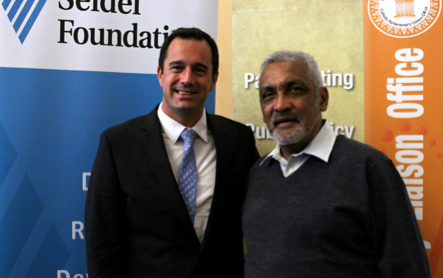